Hydrogen is a clean and critical energy vector in the transition to a decarbonized energy system required to meet the emission reduction targets of the Paris Agreement and the recent “carbon neutrality” goal by the Chinese Government.  Its production via water electrolysis is an efficient and environmentally friendly energy conversion technology. As a key half-reaction for water electrolysis, the oxygen evolution reaction (OER) is usually the rate-limiting process as it involves the transfer of four protons and four electrons. Therefore, the development of low-cost and high-performance OER electrocatalysts is highly important for improving water splitting efficiency. Metal organic frameworks (MOFs) and their derivatives hold great potential as OER electrocatalysts due to their adjustable porosity, high specific surface area, clear metal sites and component diversity.

However, the low electrical conductivity and low mass permeability of MOFs severely limit their electrocatalytic activity. The preparation of porous materials with MOFs as precursors improves the conductivity to some extent, but this strategy could bury the metal active centers. Ferrocene (Fc) can support facile electron transport due to its excellent redox properties and chemical stability. Recently, Professors Edmund Tse and Guo Zhengxiao of the HKU Zhejiang Institute of Research and Innovation and the University of Hong Kong as well as Professor Liu Jinxuan of Dalian University of Technology introduced Fc groups into MOF structures and successfully synthesised a self-supporting NiFc on nickel foam (NiFc-MOF/NF) by a hydrothermal synthesis method to realize high-efficiency OER catalysis.

Electrochemical tests show that in 1 M KOH, the overpotential of NiFc-MOF/NF is only 195 and 241 mV at current densities of 10 and 100 mA cm-2 for OER, respectively. Moreover, the morphology of NiFc-MOF was well maintained after electrolysis. From AFM characterization, in-situ electrochemical Raman spectroscopy, and DFT calculation, the high OER catalysis activity of the NiFc-MOF/NF can be attributed to: (1) improved the conductivity of the MOF due to Fc; (2) synergestic roles of Ni as the OER active center and the ferrocene group as an electron "ferry" to accelerate the electron transfer rate and lower the Gibbs free energy of the intermediate; and (3) the unique 2D MOF structure exposing more Nickel active sites, while a porous structure facilitating rapid molecular transport. 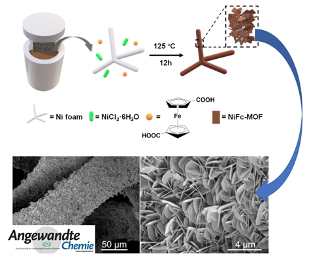 As far as we know, this is the first example that the introduction of ferrocene groups into a MOF structure can improve the conductivity of the material and enhance the catalytic activity of OER. This work provides a new strategy to design rational MOF structures that promote efficient OER.

This work has recently been published in Angewandte Chemie International Edition (see link at the end). The first authors are Liang Jing, a master student at Dalian University of Technology, and Gao Xutao, a PhD student at the University of Hong Kong.

Dr. Edmund Tse is currently an Assistant Professor at the University of Hong Kong (HKU). He received his Ph.D. degree in 2016 from the University of Illinois Urbana-Champaign (UIUC) and worked as a postdoctoral fellow at the California Institute of Technology (Caltech; 2016-18). Dr. Tse started his independent research group in the Department of Chemistry at HKU since Sept. 2018, and subsequently joined the Zhejiang Institute of Research and Innovation, the University of Hong Kong (HKU-ZIRI). His research areas include bioinorganic interfaces, hybrid self-assembled nanostructures, proton-coupled electron transfer (PCET) electrocatalysis, and computational modelling of electrochemical processes. Previously, Dr. Tse has published more than 20 peer-reviewed papers in high-impact journals including but not limited to Nat. Mater., Angew. Chem., JACS, ACS Cent. Sci., ACS Catal., Chem. Mater., etc.